What to Read? Part 3 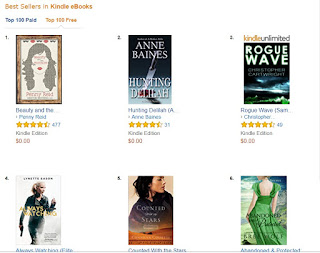 I chose it because it’s not a romance, but a book that anyone, female or male, young or old, might enjoy. It’s by author Christopher Cartwright, book #4 of his Sam Reilly series, which I have never read or even knew existed until I saw the book on the Top Free list. I noted that this is the only free book he offers, but it’s not first in a series.

The book starts with a prologue. The prologue is quite effective at creating suspense and mystery. Five days before the main story starts, a wealthy, handsome, thirty-eight-year-old engineer Luke Eldridge gets ready to compete in a regatta. He has been threatened by a mysterious conglomerate not to sail until he has made a decision on a billion-dollar offer for a scientific discovery he and colleagues have made. The scientific discovery will change the world, and this evil conglomerate wants it.

The writing is concise; the short, clear sentences will appeal to those looking for action-clad, to-the-point reading. The writing moves quickly and is mostly dialogue based. The setting is present-day, starting out in Colorado, moving out to a research vessel in the Caribbean Sea. The main character is Sam Reilly, a billionaire oceanographer hired to look into death of an old-school-friend: Luke Eldridge was killed by a strange rogue wave that hit only his racing yacht during the previously mentioned regatta!

On to the rest of the book!

Well, I finished reading Rogue Wave in record time. My opinion: this is a fast, shallow read with a great deal of pseudo-science built from a few scientific facts. Every character is either a billionaire, a genius, stunningly beautiful, or all of these. There are no love or sex scenes, no deep characters, and by the end of the book, I still had no idea what the main protagonist looks like.

Is the book worth reading? IN MY OPINION, if it's free and you’re looking for a quick read to see you through a few hours on a plane or a book that will not tax your emotional state much, you might give this book a go. It’s the equivalent of an Indiana Jones movie without the adorable Indiana Jones. There are tantalizing glimpses of the previous adventures of Sam Reilly such as the finding of Atlantis, proving the existence of “The Master Builders,” and saving the world from a deadly virus. You might be better off trying the first book in the series.
Labels: Lord of the Rings LOTR The Hobbit the shire Tolkien Zeece Lugo