What to Read? Part 4

When trying to choose a variety of genres from the Top 100 Free list, a problem soon emerges: there is little variety. A careful examination of the list shows that the majority of titles are in the romance genre. On the first page (#1-#20) there are 12 romances out of 20 offerings. 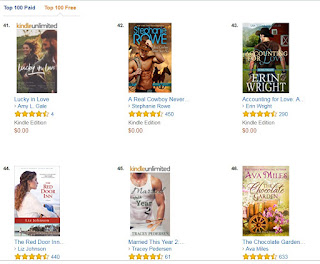 As the reader moves up the list, the proportion of romances to other genres increases. On Aug 8th, 2017,  items 41-60 are as follows. Reminder: this list changes as the day wears on.

Of the above titles, only six are not romance.
#48- Uncommon- is Woman’s Christian Living
#52- Hawaiian Hangover is a Cozy Mystery
#58- The Sekhmet Bed is also a woman’s read, telling the story of an Egyptian princess and her arranged marriage.

MY OPINION, and once again I must emphasize that it’s an opinion and everyone is entitled to one, is that if you want to read genres other than spicy romance, your pickings in the Top 100 Free are slim.

The Game You Played at Amazon.

The Old Man and the Tea at Amazon.

I chose The Old Man and the Tea, described as “Another fun-filled adventure” in the Reverend Elmo Jenkins series. It has an average of 4.4 stars from 385 reviews. The genre is Religious>Inspirational, but I'm always open to new genres. I expect it to be funny, not preachy. Let’s see what happens.


On the aug. 9th early list, the following looks promising if you are a fan of the action/suspense, special ops hero.

King's Ransom at Amazon.  This book has an average of 4.7 stars from 124 reviews. This is #3 in the Xander King series by Bradley Wright.

Do you like Paranormal Romance? Want to try a new genre and a story full of suspense, action, humor, and romance? Try Zeece Lugo's Angel's Guardian series.

Self-exiled from the vampire nation, Maxim spends his days in quiet solitude and his nights prowling the heights of New York City, hunting prey. On a cold November night, he chances upon a gang rape in a desolate back alley. He leaps at the chance to feed on predators of the worst kind, his favorite prey. But the situation takes a turn he never expected, and soon he finds himself wishing he'd made a different choice on that fateful night.

Kidnapped by a sex-trafficking ring at the age of fourteen, Angelica escaped only to be relentlessly pursued by her enemies ever since. Tonight, they have found her. As she lies dying on a cold, dark alley, her only fear is for the secret she desperately hid moments before they caught her. A secret she must protect with her life from her enemies and from the monster that destroyed them and now turns red, fiery eyes upon her.


Now available at AMAZON. Read for FREE with a Kindle Unlimited account.