What to Read? Part 6

As those of you who have read my short bio know, I live in Puerto Rico. For three days, hurricane Irma made it impossible to do anything but read, as wind and rain knocked off most of the island’s electricity.

For the last month, I’ve been scanning the Top 100 Free list for those rare books that are both really good and free. I found that those books are usually free only for a few days of special promo, and by the time I finish a book, it’s off promo and no longer free. However, a good book, regardless of price, is worth recommending.

During Irma, I read a few books I'd downloaded from the Top 100 Free over the last few weeks. The World Beneath by Rebecca Cantrell is one such book. I read it in one day because I could not put it down!

It's a mystery that begins in 1949 when a former Nazi scientist working for the U.S. government is bricked-in alive (as in "The Cask of Amontillado") in the subterranean tunnels of New York City and forgotten. Jump to present New York City where a contract-killer tracks his prey to that same brick wall.

The story is imaginative, fast moving, full of tension and atmosphere, and has great characters that include a brave, lovable dog called Edison. I loved the ending too! The book is now $4.99 on Amazon. It's part of a series called the Joe Tesla series. 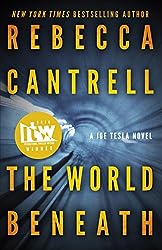