Showing posts from June, 2020
Show all

Reflections On Our Times 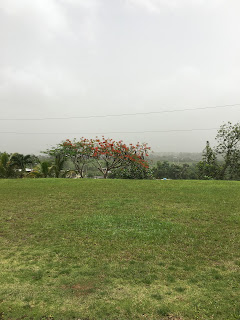 I just took this picture. It's the view I have from my terrace at the moment. What is normally a beautiful sweep of mountains in the distance,  has been reduced to a film of white dust which totally  eclipses the mountains. It looks like a shot of southern Florida when you're away from the water. The phenomenon is caused by Sahara dust. You might be wondering what does Puerto Rico, a small island in the Caribbean, have to do with anything in the Sahara, especially its dust. The answer lies with the whims of climate.    Now, I must  emphasize at this point, that never  until I returned to the island ten years ago, had I heard of Sahara dust. My mother, who taught me everything I learned about the island and my ancestry, never mentioned it. She did talk at length of the terrifying thunderstorms of summer and of the northerly spring showers named for the "Pigeon Peas." She also mentioned often the great killer hurricanes of her father's youth and the earthquake of 19
Post a Comment
Read more
More posts